Year - Volume - Issue
2020, volume 1,
Issue 2
Authors
Alexander V. Dol, Dmitry V. Ivanov, Olga A. Fomkina
Heading
Anatomy
Article type
Original article
PDF File
Saratov_Med_J-2020-0201.pdf
Abstract
Objective: to optimize the process of blood vessel biomechanical modeling via developing models of cerebral arterial circle.
Materials and methods. Biomechanical modeling requires development of a patient-oriented three-dimensional (3D) solid-state geometric model of the object under study. This task can be resolved by computed tomography (CT) or magnetic resonance imaging (MRI). We developed the program that implements the construction of blood vessel contours from separate slices of MRI in a semi-automatic mode. These contours are exported as saved curves in a specific format to SolidWorks, where they are used to create 3D models of blood vessels. The models obtained this way take into account individual characteristics of the vascular system structure of a particular patient, and can be used in the process of biomechanical modeling.
Results. The results of the program implementation of the recursive frontal growth method for processing 2D slices of tomograms are presented.
Conclusion. The developed software allows semi-automatic loading of DICOM images and obtaining flat cross-sections (MRI slices) of vessels on their basis, as well as transferring them for further processing into computer-aided design systems.

Biomechanical modeling is among the most important stages of preoperative planning, which enable surgeons to select and justify a certain version of prospective surgery [1]. Its implementation requires the development of a patient-oriented three-dimensional (3D) solid geometric model of the object under study., Unlike the surface model, carrying information solely about the points limiting the external configuration of the body, a 3D model conveys data about each point of the surface and the internal volume of the body. The series of images obtained via magnetic resonance imaging (MRI) and computed tomography (CT) is used as the initial data for the model.

Previously, we considered and successfully applied the manual construction technique of solid-state models of arteries, based on CT data, obtained after administering a contrast agent, and on information related to the biomechanical properties, attained in the experiment on stretching artery samples. This technique enabled us creating editable smooth solid models [2, 3]. However, if it is necessary to perform a series of numerical calculations, this process significantly decelerates the research process [4].

The issue of process automation of constructing 3D solid-state geometric models of the studied biological objects is currently among the most problematic in the field of biomechanics, because under the development automation of 3D models, the likelihood of errors that may appear during manual processing of CT and MRI data, and of incorrect interpretation of the simulation results, are significantly reduced.

Researchers have only a manual way to create solid models, which requires plenty of time and a sufficiently high qualification of the performer (as a rule, an engineer, rather than a medical professional) [5]. Partial automation of the process of constructing 3D models of biological objects is available only for creating surface images [6].

When processing CT and MRI data, the active contour method and the frontal growth method are most often used [7, 8]. There are commercial software packages, such as Materialise Mimics [9], which is used to create 3D surface models from stacks of 2D image data, and in which these methods are implemented in one form or another. Moreover, their cost is quite high, and similar complimentary packages (3D Slicer, VMTK, ITK Snap) have a narrower specialization [10-12]. These packages are based on the active contour method (ITK Snap), the frontal growth method and the level determination method [13].

Thus, all available contemporary programs in a semi-automatic mode allow developing only surface models, most often STL. Such models must go through a subsequent refinement procedure, which requires significant time resources and, as indicated, specific engineering skills. The result of such improvements entirely depends on the user’s qualifications. Hence, the likelihood of errors and inaccuracies is quite high.

We developed a program in the Delphi environment implementing the described method, and also allowing the user to download individual images (slices) of the tomogram for further processing; to build a flat closed curve corresponding to the contour of a certain blood vessel lumen; to save the data about the constructed curve to a file, the format of which corresponds to the format of the curves storage in the SolidWorks software package (Figure 1).

Figure 1. Interface of the developed program

The method of recursive two-dimensional frontal growth makes it possible to cut off (by choosing the starting point) all ‘redundant’ slices of blood vessels, which, along with the section of interest, may fall on the processed slice. If the object boundary is defined, then the algorithm does not imply further checks of the remaining pixels to reduce the number of operations and optimize the use of computer resources. In this case, the sensitivity of the method (i.e., a numerical value for the criterion of pixel similarity) can be changed manually by the user.

By sequentially processing CT slices with a contrast agent of a patient with a circle of Willis of the conventional structure, using this program, we obtained a set of curves that were then imported into the SolidWorks software package. Here, using the Lofted Boss tool, the sections of the vessels were built, which were then connected using the Trajectory Boss and Combine Bodies tools. It should be noted that, since not all sections of the vessels on the slices were perpendicular to the CT slice plane, it was not possible to construct a model of the circle of Willis entirely with just a single tool Lofted Boss on the basis of obtained curves. In this regard, additional refinement of the models was required, which consisted in combining individual vascular segments into a single 3D solid model.

The initial data about the image (each slice of the tomogram) in the course of program operation are loaded as a two-dimensional array of pixels, each cell of which contains information about the color, and the cell indices define its position at the image. In this case, the color of the pixel is stored in RGB format: each cell contains information about the intensity of red, green and blue shades in the range from 0 to 255. As the initial data, we used CT images of cerebral vessels, performed with a contrast agent. The images were contained in files of the DICOM format, and in the course of the work, a procedure was implemented for the user to select the required slice [14]. 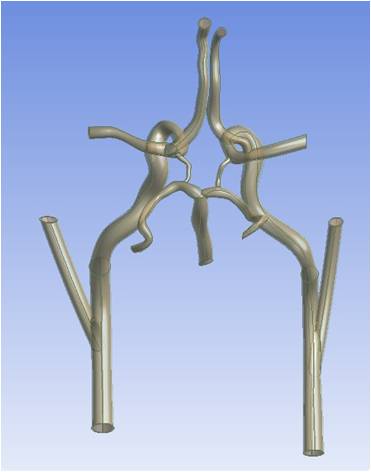 An open circle of Willis, in which there are no posterior communicating or anterior communicating arteries, was constructed by deleting the corresponding sections of the vascular bed in the SolidWorks software package using the Divide and Delete Solid tools.

The lesion of the carotid arteries by atherosclerosis was modeled using the Rotated Boss tool by constructing a plaque profile and rotating it around the axis of the blood vessel.

Figures 3-6 present the models with various pathologies, built within the framework of testing the described approach to modeling. 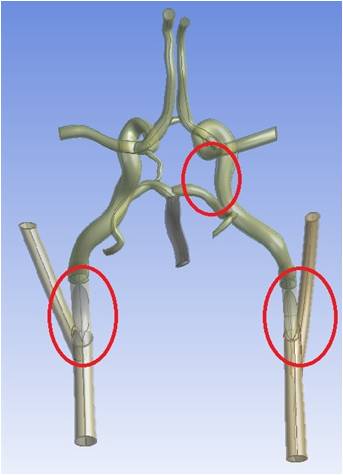 Figure 3. Variant of the cerebral arterial circle with stenosis of internal carotid arteries and absence of the right posterior communicating artery: a 3D model 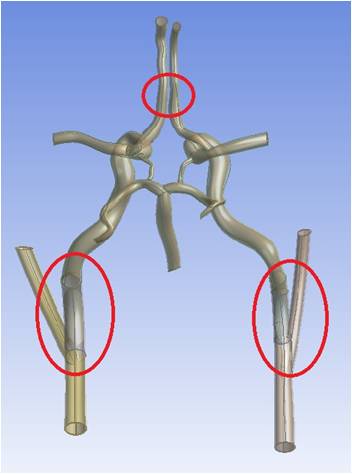 Figure 4. Variant of the cerebral arterial circle with stenosis of internal carotid arteries and absence of the anterior communicating artery: a 3D model 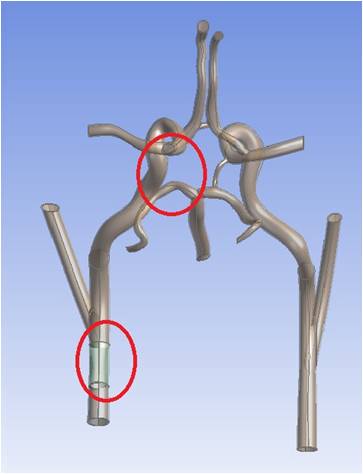 Figure 5. Variant of the cerebral arterial circle with stenosis of left internal carotid artery and absence of the left posterior communicating artery: a 3D model 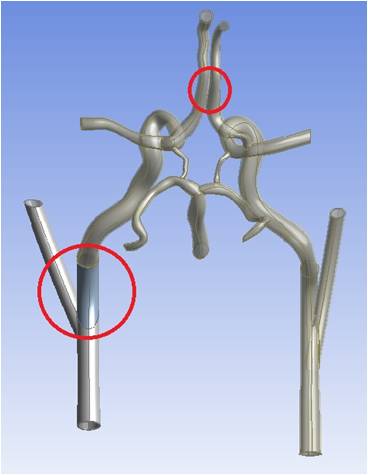 Figure 6. Variant of the cerebral arterial circle with stenosis of left internal carotid artery and absence of the anterior communicating artery: a 3D model

The development and implementation of a semi-automatic mode for creating solid models will make the process of formulating and solving the problem of biomechanics much easier and faster. Automation will reduce the requirements for the performer’s qualifications in terms of technology expertise, which will enable representatives of medical professions to conduct biomechanical modeling without the help of engineers.

In addition, the reduction in time, required for processing the data of medical diagnostic equipment, along with the possibility of fast development of patient-oriented vascular bed models, will allow using biomechanical modeling in the process of preoperative planning of surgical interventions.

It is planned to use the constructed solid models of the Willis’ circle blood vessels in biomechanical modeling, aimed at identifying and substantiating possible connections among stenosis of the carotid arteries and associated cerebral aneurysms. The presumption of such connection existence is contained in medical articles, based on clinical trials [15-17].

Biomechanical modeling with personalized models, as a stage of preoperative planning, is being actively implemented in the field of vascular surgery, as well as in other areas of medicine, for example, in traumatology and orthopedics [18, 19]. The authors note that the inclusion of biomechanical calculations at the stage of preoperative planning will reduce the number of complications and, as a result, improve the quality of medical care.

Within the framework of our study, the frontal growth method was implemented in software. The created application allows, based on the data of medical diagnostic equipment, to create 3D solid models of the vascular system sections in a semi-automatic mode. This approach can significantly reduce the execution time for numerical modeling of blood vessel hemodynamics.

In the future, we intend to carry out a series of numerical calculations, aimed at studying the hemodynamics of the circle of Willis in the presence of pathological changes in this section of the vascular bed.

The authors declare no conflict of interest.